ClubSwan recognizes Swan owners competing in the world’s most important offshore regattas with beautifully handcrafted Asprey Swan Challenge trophies. This year’s Swan Caribbean Challenge was awarded to Swan 51 Northern Child (GBR), for their performance in the RORC Caribbean 600. The next event is the Swan Transatlantic Challenge with the NYYC Transatlantic Race at the end of June.

What’s in a trophy? Pride, recognition, merit, reward and long standing memory of a great achievement. Trophies have marked victories since ancient times. Chalices were given to winners of sporting events at least as early as the very late 1600s in the New World. Chalices, particularly, are associated with sporting events, and were traditionally made in silver. The Davis Cup, Stanley Cup and numerous World Cups are all now famous cup-shaped trophies given to sports winners – and of course then there is the America’s Cup, the world’s oldest continually contested sporting trophy.

Competition is an integral element of ClubSwan, whose close-knit family of owners belonging meet regularly at exclusively appointed regattas, cruising rendez-vous and social events around the world. No wonder that ClubSwan decided to recognize Swan owners competing in the world’s most important offshore regattas with a special set of “chalices” – beautifully handcrafted Asprey Swan Challenge trophies. Excellency and craftsmanship, which are core values at Nautor’s Swan, are here matched by the tradition of renowned global luxury brand and British jewelers Asprey, founded back in 1781. Asprey has a long and established relationship with British royalty dating back to the 1800s when Queen Victoria awarded the first Royal Warrant. Since then, Asprey has held a Royal Warrant for every British monarch and several other foreign heads of state.

Asprey prides itself on attention to detail and sophistication across its catalogue of products. The brand crafted the original Swan Cup in 1984, and all of the trophies to date, including a scale model of the Swan 45, which is on display in the lobby of the Yacht Club Costa Smeralda. Other highly sought-after trophies include the Swan Maxi trophy, awarded to the top Swan in the Maxi Yacht Rolex Cup, the Swan 45 Gold Cup, the Swan 60 Gold Cup, the Nord Stream Race Trophy and the Gazprom Swan 60 Class Trophy.

The Swan Challenge Trophies hold a special significance since they recognize achievements that are not easy to accomplish, hence showcasing the qualities that make Swans unique and so special. As much as Swans are strong, powerful and reliable yachts, so their owners and crews exhibit determination, skill, passion and resilience.

Lucy Reynolds’ Swan 51 Northern Child conquered the first Swan Challenge Trophy of the 2015 season, as first Swan and third in IRC 2 at the RORC Caribbean 600.

Next up will be the Swan Transatlantic Challenge trophy which will be presented to the first Swan in the NYYC Transatlantic this June. 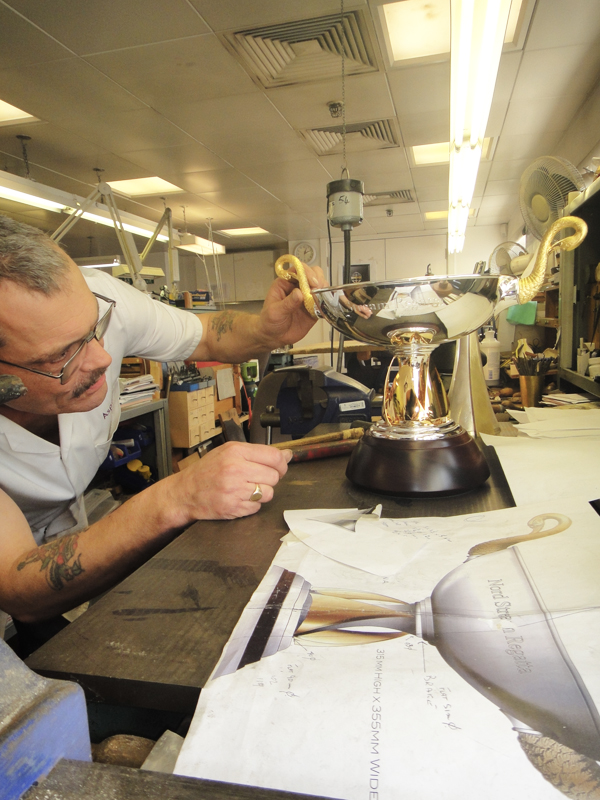